One thing they don’t tell you about being a small business owner is the amount of time you’ll be spending doing Ikea-style assembly of things. For instance, my wife bought a dozen fitness trampolines without telling me, scheduled a trampoline class without telling me, and then told me all those things about three hours before our first trampoline barre class. So much of my Saturday morning was spent assembling a dozen fitness trampolines while she danced around to music, “supervising.”

I took class and… I didn’t hate it? It was actually really fun, reminds you of being a little kid! In fact, I think the best trampoline barre teachers are probably 12-year olds who haven’t been disillusioned by the real world yet.

You could definitely spend the entire 45 minutes bouncing around like a little kid, but the “workout” portion of it is actually ridiculously hard – you mostly want to keep your head level, and then pound down on the trampoline as if you were a superhero making a superhero landing. Over, and over, and over again.

Let’s zoom in on that Callie face – 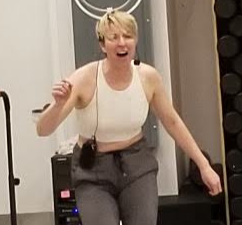 Friday night was one of the greatest nights of my life. About once a year, Callie gets a craving for fast food. Sometimes it’s McDonald’s fries, other times (usually) it’s Sonic, and on Friday night, she saw this article and started craving taco bell!! She got a nachos supreme, no beef, and a cheese quesadilla. I got, like, a taco or something.

For some reason, I had a nightmare Friday night. Not the type of nightmare you’re thinking of, it was way worse.

Everyone knows that the best dreams are the dreams where you wake up and you’re suddenly at the world’s largest all-you-can-eat buffet, you polish off six or seven plates of chinese, sushi, ribs, mongolian bbq, and some french fries, and then you wake up and you’ve consumed zero calories!

So what nightmare did I have that was worse than anything you could possibly imagine? I dreamt that I worked out. Like, a full hour of hitting a heavy bag. And then I woke up, and I had burned exactly zero extra calories. Worst dream ever.