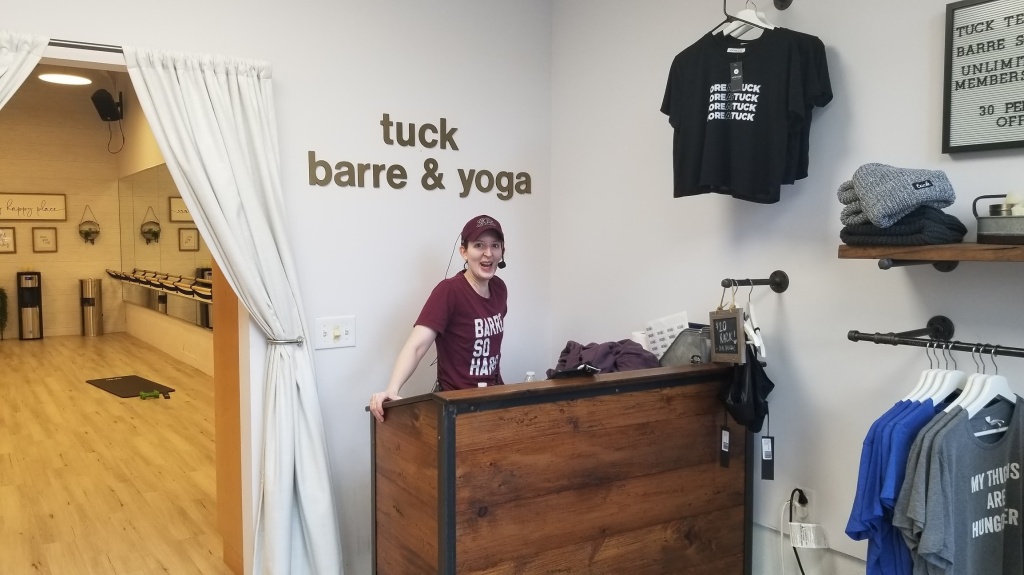 Hi! This is Becks. I’ve mentioned before that our barre teachers seem to get extra excited to torment me when I show up for a class, and Becca was certainly no exception – you can see the glee in her face. Great for her, awful for me.

I’ve mentioned before that we had a hard time finding great barre teachers when we first opened. We auditioned tons of teachers, and we hired exactly two. One was Chernobyl Kate – the other teacher that killed it right from the start was Becca. Becca is a true tuck OG – she was the first barre teacher we ever hired, and she’s been with us since we were just a little neighborhood studio in Point Breeze. She’s also by far the most positive person on our team.

When I take barre with our other teachers, there’s always a bit (a lot?) of resentment in my inner dialogue with the teacher. Example:

Callie: Guys, I know it burns!

my inner voice: (Don’t fake sympathy you jerk, you’re the one making it burn!)

Kate: This is not where you give up!

my inner voice: Why the fuck did we buy you ankle weights in the first place?

Not so with Becca’s class. She’s somehow so bright and positive and encouraging that you just feel a little guilty when you have to take a break. But even then, Becca is there to support you – other teachers call them breaks, Becca’s just like “It’s okay if you have to reset, you’ll come back stronger!” My inner voice: Ugh, okay, you’re right, I’ll keep going…

Class started out harmlessly enough with some body weight squats. Now I’ve been doing a Russian squat program for the past thirteen weeks so I thought I’d be prepared for this – how wrong I was. The thing about the Smolov squat program – if you’re doing five sets of five reps, you’re exerting energy for a total of about 75 seconds. The squats in barre? First, you do body weight squats. Then you sit in a squat. Then you stay in that fucking squat for the next fifteen minutes while you do a million variations that make different parts of your glutes hurt in sequence.

Oh, you’re getting used to the squat? Now both heels up! Now stay there for another five minutes.

I actually think barre exercises discriminate against guys. Women are used to wearing heels, so their feet are used to being in this shape. For guys, this is uncharted territory. 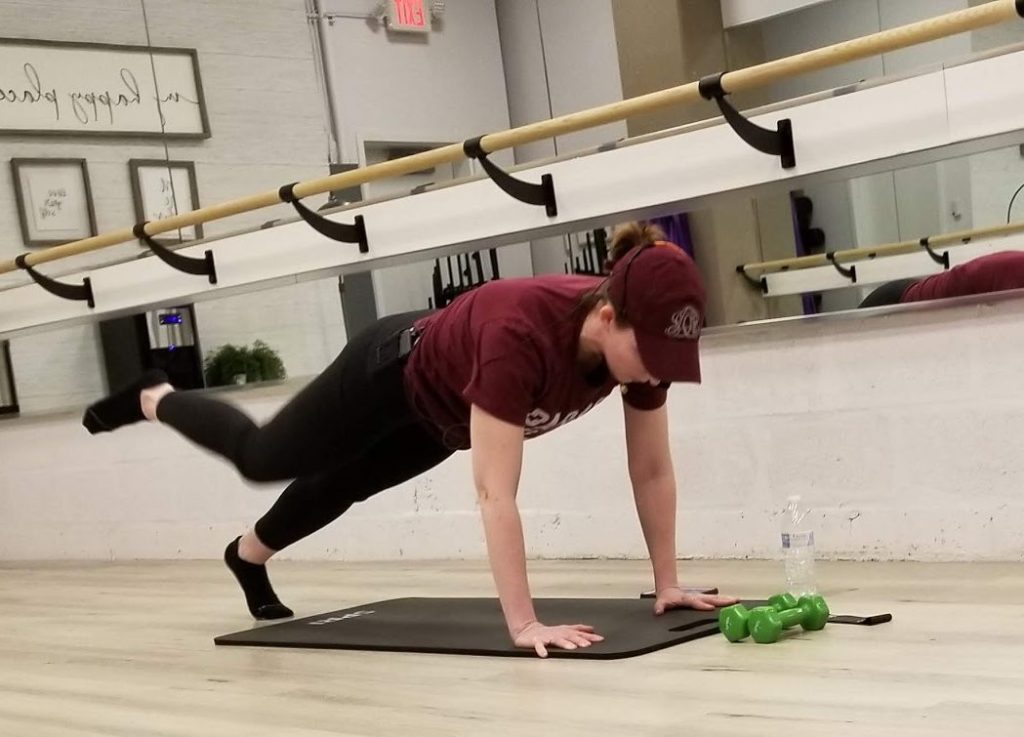 So after 15 minutes of squat variations, we moved on to plank. Once again, I thought I’d be somewhat prepared for this since I bench press once a week. Once again, dead wrong. First, you get into plank. Then you lift one leg. Then you pulse that leg. Then you pulse it twice as fast. Then, with that leg raised, you start doing pushups. Then you cross that leg over the other leg and do more pushups. And that’s just the first side. I seriously thought we were going to be done like six or seven times before we even finished that first side. And you’re holding plank that whole time! Terrible.

The morning barre classes at University City tend to be on the smaller side, which for me is decidedly a bad thing. With smaller classes, there is absolutely nowhere to hide. Also, I was clearly the only one sweating from that plank/pushup sequence, which made me feel even worse.

It’s always interesting to me to see how our teacher’s personalities come out when they teach – Becca is absolutely all over the place with what she says. At one point she channeled Einstein – “Energy cannot be created or destroyed! It can only be in this room, so give it all you got!” and at another point she channeled R. Kelly – “Your body’s telling you no, but your mind is telling you yes!” During an arms sequence she was yelling “Imagine you’re hugging a tree! You’re a tree hugger!”

After arms we went to the barre for some more discriminatory exercises not designed for men. Those men’s rights activist idiots would HATE barre. This was about 35 minutes into class and I was definitely looking for a way out. Right above me is a fire alarm – I briefly considered pulling the fire alarm so we’d all have to evacuate.

After that, Becca announed “Alright, we have just enough time for my one minute abs!” Guess what? Another lie. In the same way that cookbooks and recipes lie about how long it takes to caramelize onions, Becca’s “1-minute” abs was actually a five-minute sequence of ab workouts. At this point, I just gave up and laid down on the mat.

At the risk of making a generalization, I think I understand why barre primarily appeals to women. From a reproductive perspective, women are stuck having to carry around a baby for nine months, and often have to endure hours and hours of labor, so they have high tolerance for extended periods of discomfort, which is exactly what barre is. The male contribution to the process is a few seconds of exertion, much like lifting weights.