I woke up naturally this morning at 5:25am – I tried to watch The Mummy on Netflix, but Callie grumbled something about turning the sound down, and The Mummy is just not a low-volume subtitle type of movie. So, I decided to go to Cassie’s barre class instead. Cassmagrass is a tuck OG – she was with us from almost the moment we opened, and she was part of the very first class of clients that took barre teacher training and then started teaching for us.

Here she is rocking out, wearing some Pure Barre gear ironically, kind of the way Netflix employees wear Blockbuster Video t-shirts as a joke. Since taking her barre workouts to a new level at tuck, she hasn’t been back to Pure Barre. At this point, she could be in a coma and still make it through a Pure Barre workout.

So I walk into class and take a quick look at the class/schedule, and I realize my first mistake. This isn’t a barre class, it’s a goddamn core barre class. I HATE core. I am philosophically against having a strong core. I consider my core a sacred vessel to be filled, sometimes overfilled, with delicious food. A strong core i.e. a rigid container, does not allow for this overfilling. What I’m looking to develop is a flexible, elastic, pliable core capable of expanding to envelop whatever I consume. My personal hero is Wing Bowl champion Molly Schuyler who has, at different times, eaten 37 corndogs, three 72-oz. steak dinners, and a Wing-Bowl-record 501 wings. I don’t know Molly personally, but I doubt she does a lot of core exercises.

Cassie is the opposite of Molly. She recently had some kind of surgery, and the surgeon had to abandon his original plan to cut through her abs because her abs/core were so strong. “I ruined two scalpels before I gave up trying to cut through that titanium barrier,” the surgeon was overheard saying, “Forget concrete or steel, if Trump wants to build a wall, he should build it out of Cassie’s abs.” (True story – quotes may have been dramatized)

So there I am at 6:15am at our Point Breeze studio, trapped in a class with Core Colossus Cass. I haven’t taken Cassie’s class in almost a year so I’m not sure what to expect, but what I didn’t expect was a scene that looked like something out of a daycare at 2pm.

Turns out, those green things are ankle weights. The light blue thing is… I don’t even know how to describe it, it’s like a scarf made out of super thin rubber. The black band goes around your thighs. The purple weights are actually 75 lb. hand weights, because I’m a beast like that. And the little black thing is just the remote that controls the music. 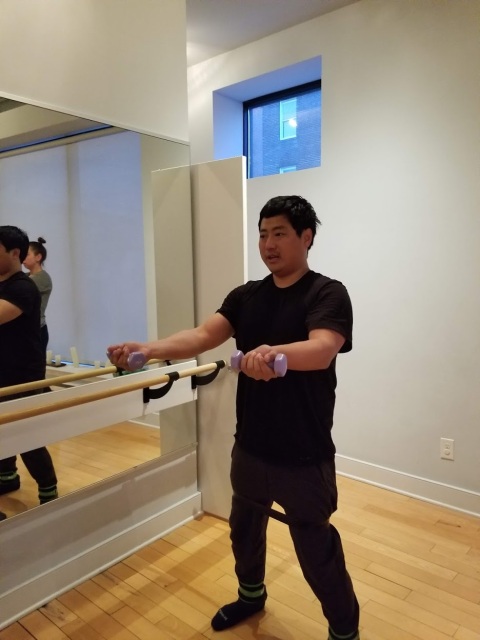 I don’t remember what was going on here, but it sucked. In my head, I’m already mourning the loss of stomach capacity. 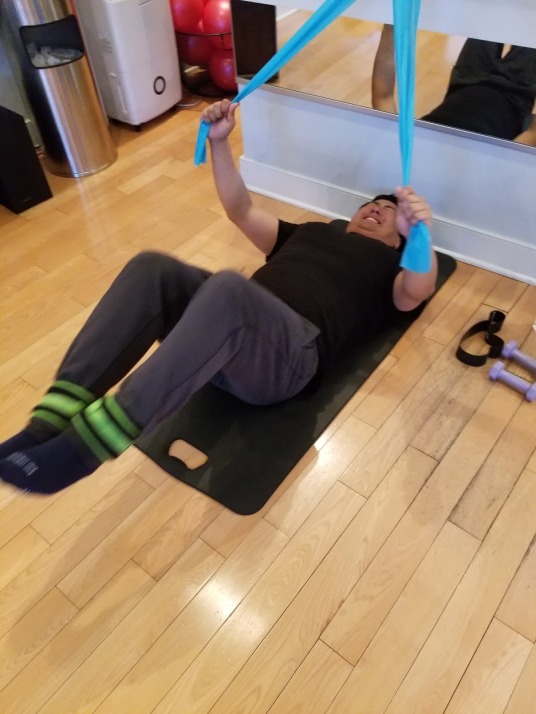 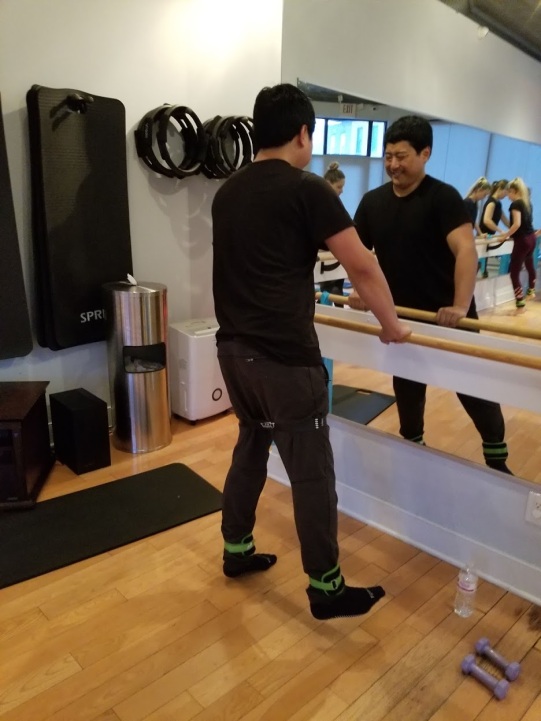 In the background, you can see someone doing what I’m supposed to be doing. 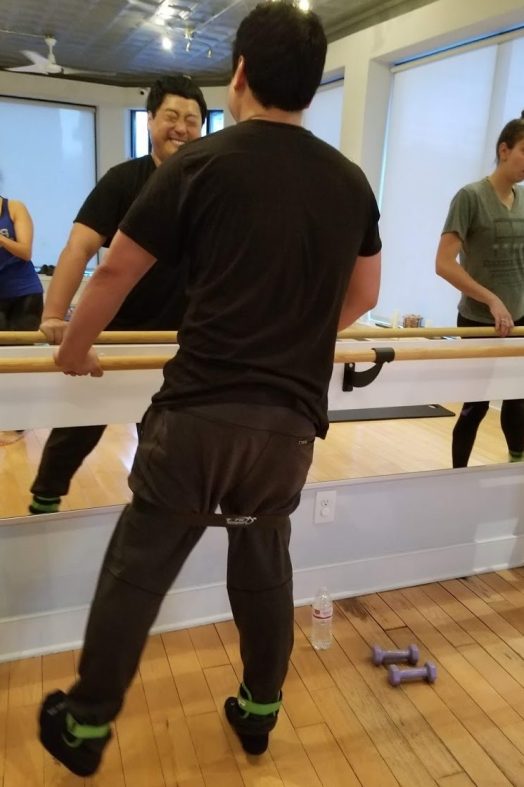 Point Breeze was our first studio, and it’ll always have a special place in my heart. But one thing that sucks about it is that it’s smaller, meaning there is NOWHERE TO HIDE. See, barre helps you develop a multitude of skills, the most important of which is room awareness. You must, at all times, be aware of the instructor’s line of sight. When you’re outside the instructor’s field of vision, that’s what I call the “safety zone.” That’s when you can drop your weights/form/whatever, shake it out, and get a quick recovery. The larger classes at our West Philly location are great because you can hide behind rows of people. But at Point Breeze? Everyone is basically in one staggered row, so you’re pretty much always in your instructor’s field of vision. Every time I tried to take a break, I was met with a “What the fuck Hagana, get back in it!”

And now, my legs are dead. Thanks for ruining stairs for me for the next two days, Cassie.

Oh yeah, Cassie is Bunny’s #1 fan. She gets ridiculously excited to see him. You can see more on Cassie’s instagram here 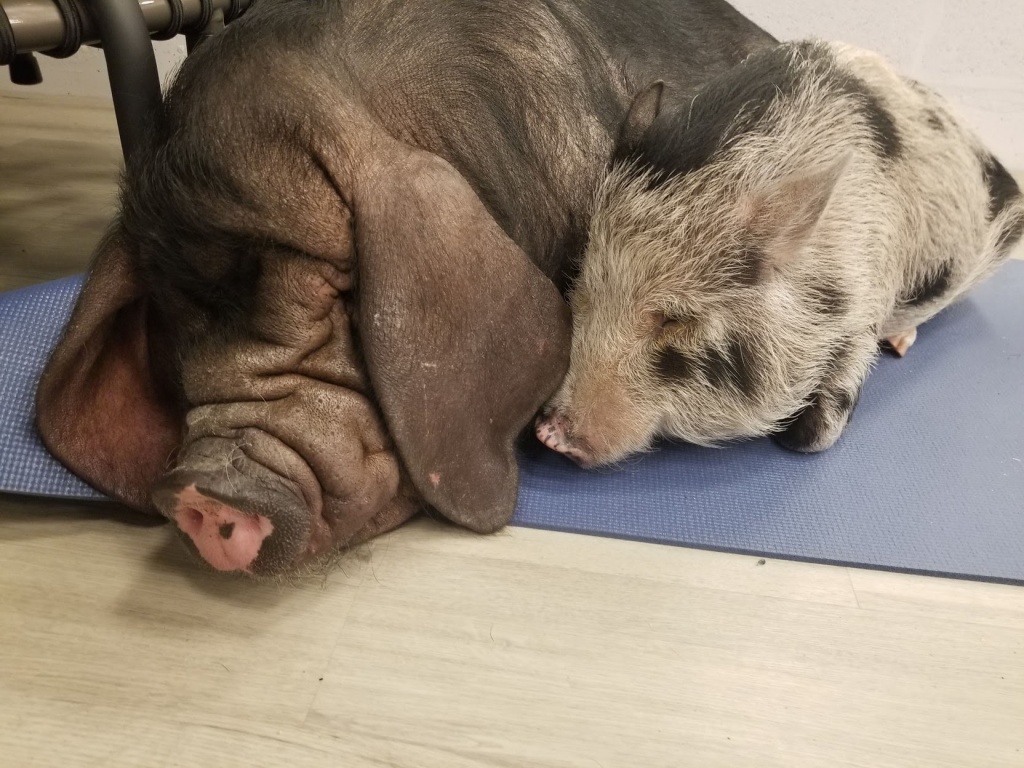 Here are some pigs cuddling from last Saturday’s pig yoga. Next one is on March 23rd!

2 thoughts on “Core Barre with Cassie”