It snowed last week. Outside tuck 2, we usually have a sidewalk sign with some sale advertised, or just “barre & yoga” written on it. It was cold and I thought I was being clever, but Callie didn’t like my pun. 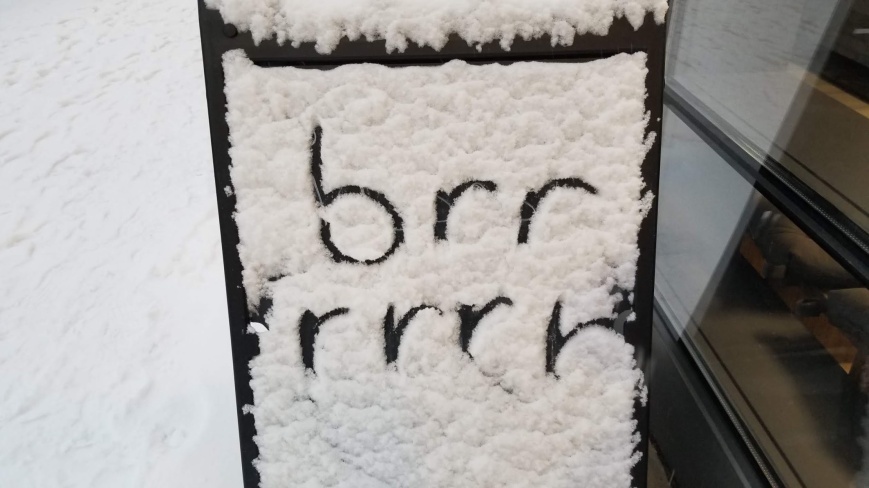 A few weekends ago, I got the chance to spy on a barre teacher training while waiting to go to a Sixers game. What I witnessed confirmed what I had always suspected – the lies spewing from the mouths of barre teachers are planned, intentional, and entirely pre-meditated. Here are some things I overheard:

I haven’t been to a Sixers game in a while, but I knew I’d 1) be hungry and 2) unable to resist hot dogs no matter the price, so I tried to be frugal and prepare by treating myself to a 7/11 chili cheese hot dog right before we went to the game.

The hot dog, chili and cheese were great, but unfortunately the bun was stale, so all it did was remind me how good hot dogs are when on a great bun. So I ended up getting a hot dog and crab fries anyway (Callie got popcorn and a pretzel). The Sixers also DESTROYED Lebron and the Lakers by about 30 points – this was the second game with the new line up – Tobias Harris is the real deal! Joel Embiid had a crazy game too. I bet those guys could crush barre – Sixers players, any time you want to come to tuck, classes are on me!

Some of the stuff you need to do in thai yoga massage, you just can’t verbalize without being silly. So Callie ends up saying a lot of things like “Yeah, thumb that butt good!” or “Place your hands on their pelvis and find their pulse… yeah, it’s pretty intimate” (pictured above).

By the way, the butt thumbing part is NOT what it sounds like, you find some muscle (I think it’s a muscle) called the pyra formus or something (I couldn’t even spell it close enough to get proper Google results), and press with your thumb.

Philadelphia has the weirdest culture of rudeness/politeness. It’s pretty much 99% rudeness, 1% politeness. Trying to use the proper (back) bus door to exit? You have to yell “BACK DOOR!!!!” at the SEPTA driver while he’s busy rolling out the red carpet for people to exit by the front door (dumbest thing ever). But accidentally make the same mistake on a trolley? Everyone yells “STEP DOWN YOU FUCKING IDIOT!” Accidentally slip on the snow on a busy rush hour sidewalk? “Watch where you’re going, asshole!” Accidentally bump into someone on the street? “Fuck YOU!!”

But then there’s also the 1% of politeness, which happens in exactly one circumstance. Going into a Wawa? Stranger: “Oh, good morning ma’am! Please, let me get that door for you! Have a blessed day!”

Speaking of Wawa, the 2 for $3.33 sizzlis are crushing my hopes of dieting. I decided to take off half of the upper croissant to go “low carb.”

Then I ate it anyway.