Callie’s as good at cooking as the barre bro is at dieting. So, she sucks at it. But, she needs to eat! A lot. And since I can cook a little bit, we’ve started playing this game called “Married Life” where Callie says, “I’m hungry!” whenever she’s hungry. And I’m supposed to respond with, “What do you want?” And then Callie just… orders something, whatever comes to her mind, as if I know how to cook all 874 items on The Cheesecake Factory’s menu.

The Barre Bro’s wife doesn’t eat quite as many calories as Michael Phelps does, but she’s not far behind. With multiple days a week where she teaches doubles (and sometimes even triples), it’s important for the barre bro to keep his wife fed. Mostly because she doesn’t really know how to feed herself.

Unlike the barre bro, who is always thinking at least three meals in advance, Callie lives in the present and doesn’t even think a single meal ahead. If she suddenly gets a hunger pang while in the car, she’ll grab the nearest edible item, and suddenly she’s having an entire pack of tic tac breath mints for lunch. Or, if that hunger pang happens to occur in a candy store, she’ll stuff her face with 2 lbs. of rolos. None of which is conducive to fueling her athlete-level energy expenditure. So, I started meal prepping for her on Sundays! And this past Sunday, I took some pictures to document the process. Warning: this post will have, like, fifty pictures. 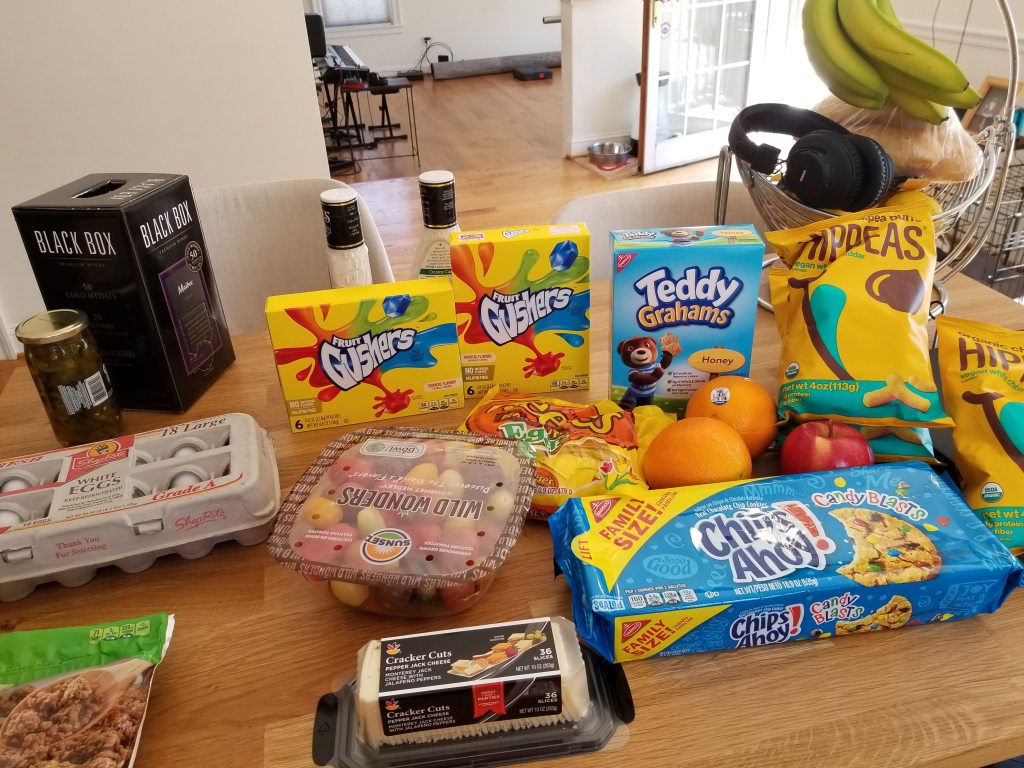 This is what happens when you take Callie to the grocery store when she’s hungry. While I’m filling the cart with fresh produce and healthy-ish food options, Callie is going straight back to her Midwestern roots with all kinds of processed sugary goodness. Anyway, let’s get this meal prep on!

Can’t meal prep without some quality cinema going in the background – Jason Statham is a national treasure. Except he’s British, so really more of a British treasure, like Stonehenge. Or Wimbledon. I asked Callie if I should save this movie for when we could watch it together. “What’s it about?” she asks. “Jason Statham fighting giant dinosaur sharks…” and this is how I end up watching most movies by myself. 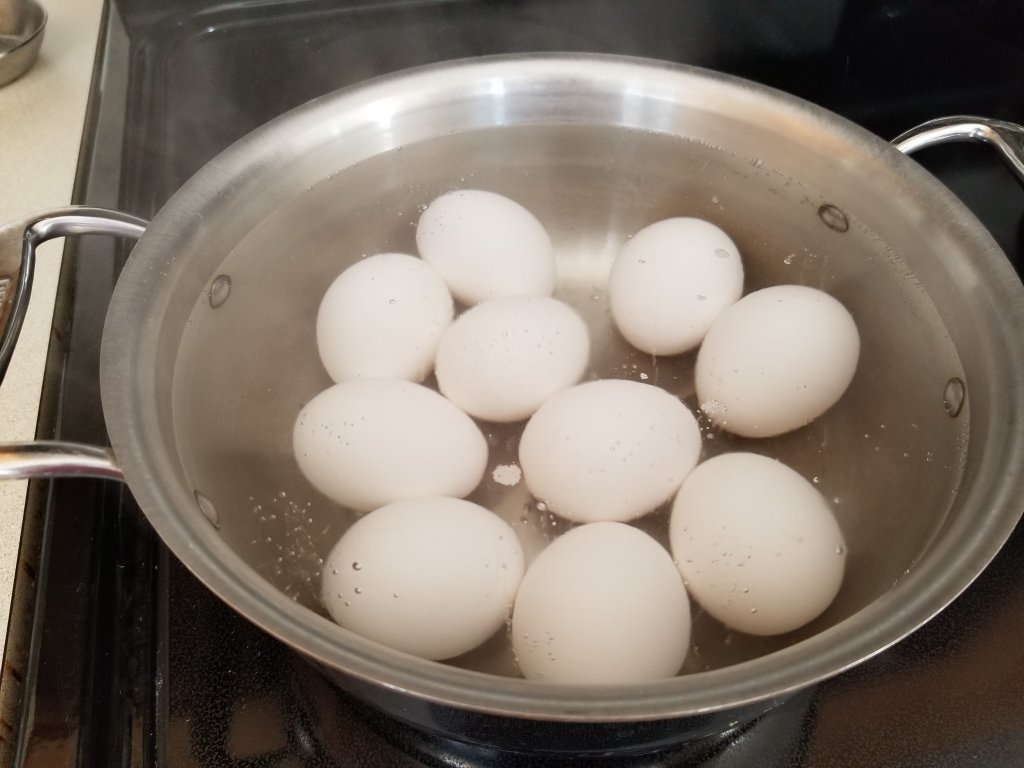 First sixty-degree day of the year, so Callie’s outside with the dogs. Sixty-degrees also means…

Sangria time! Shortcut it with mason jars. Class it up with Black Box malbec.

Got a six-pack of romaine, chop up three of them (the other three go back in the fridge – they seem to last longer unchopped). 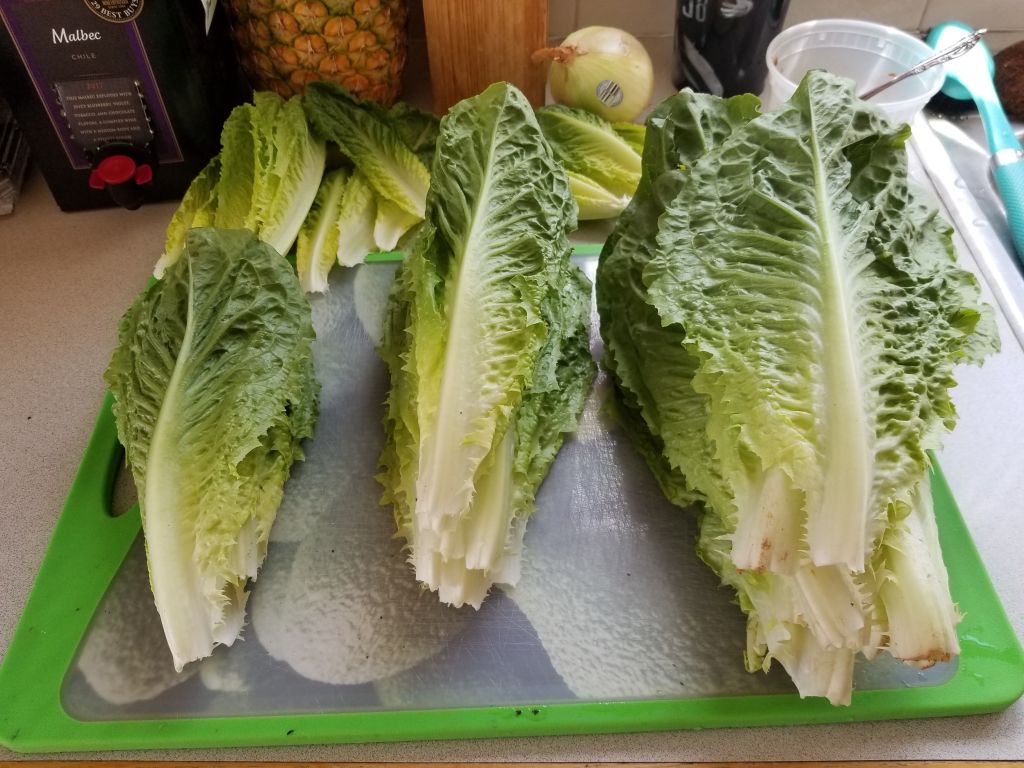 I used to chop up the romaine one bunch at a time, but it turns out it’s way faster when you separate all of the leaves from all three bunches, stack in roughly three piles by size, then chop. 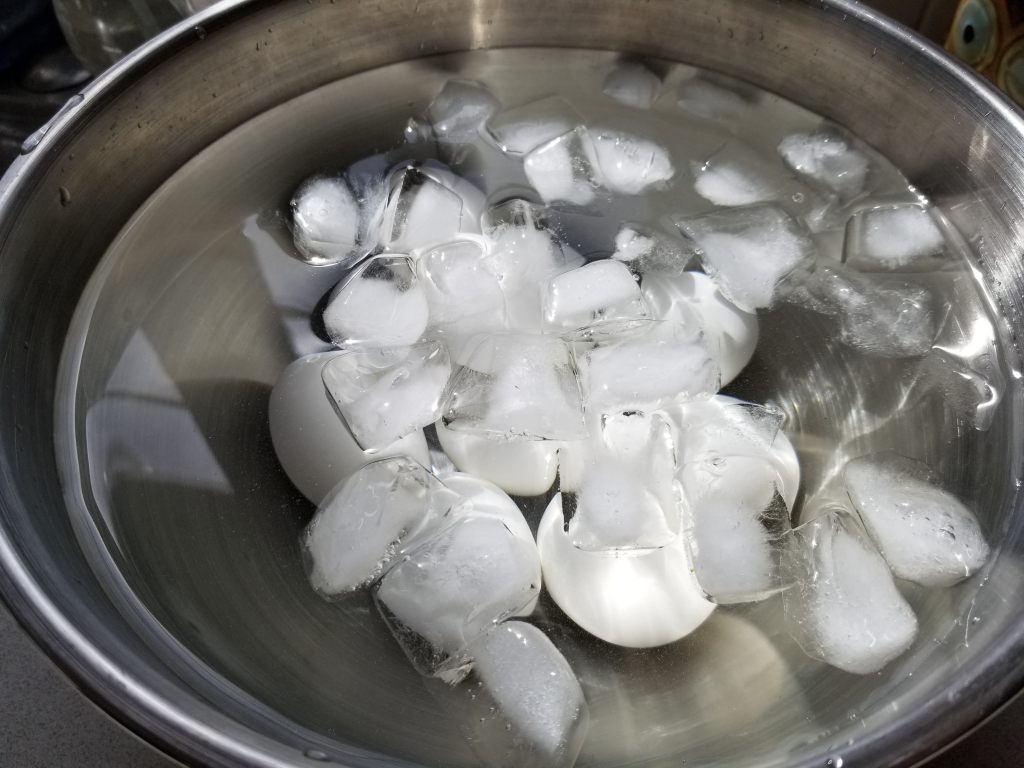 Timer goes off for the hard-boiled eggs! Immediate ice water bath for that easy peeling. 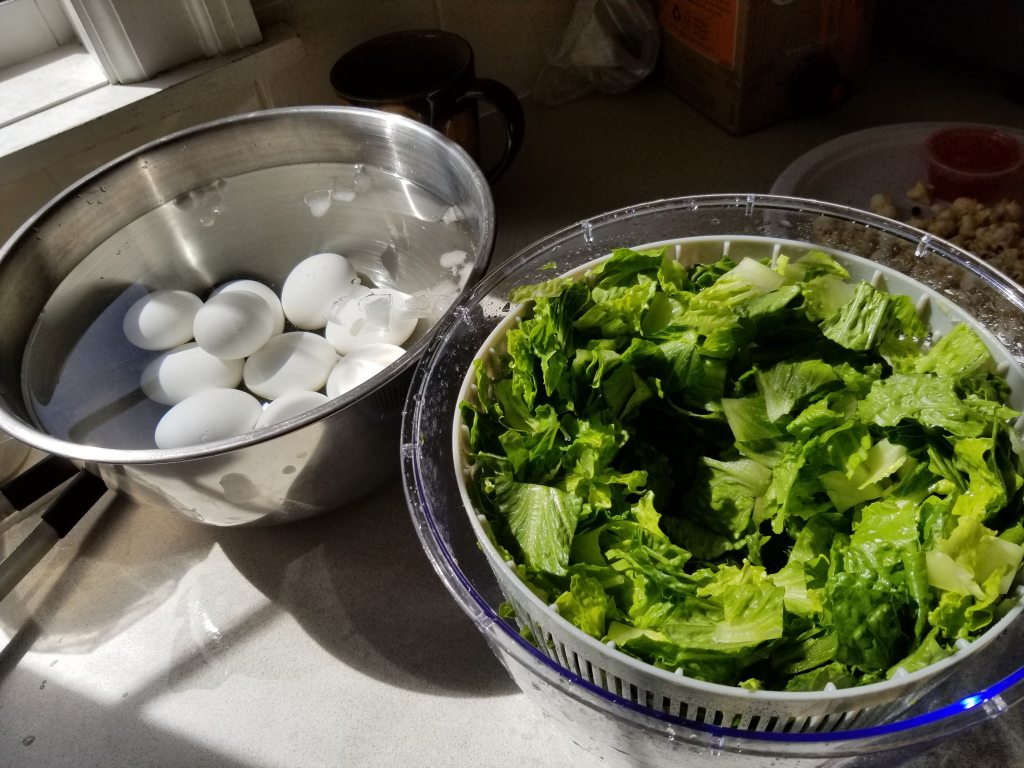 Salad spinner the shit out of those romaine leaves. 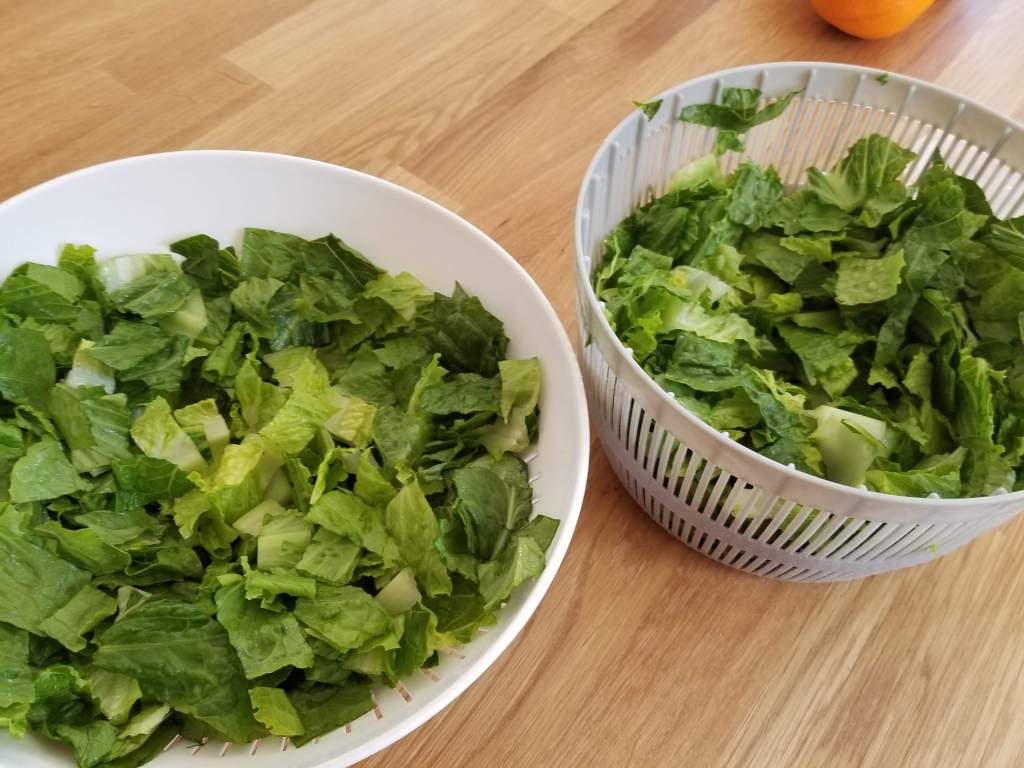 Spread out the leaves in two colanders and throw in the fridge for an hour to completely dry out. I don’t know if it’s just my imagination, but it seems like they dry faster in the fridge. 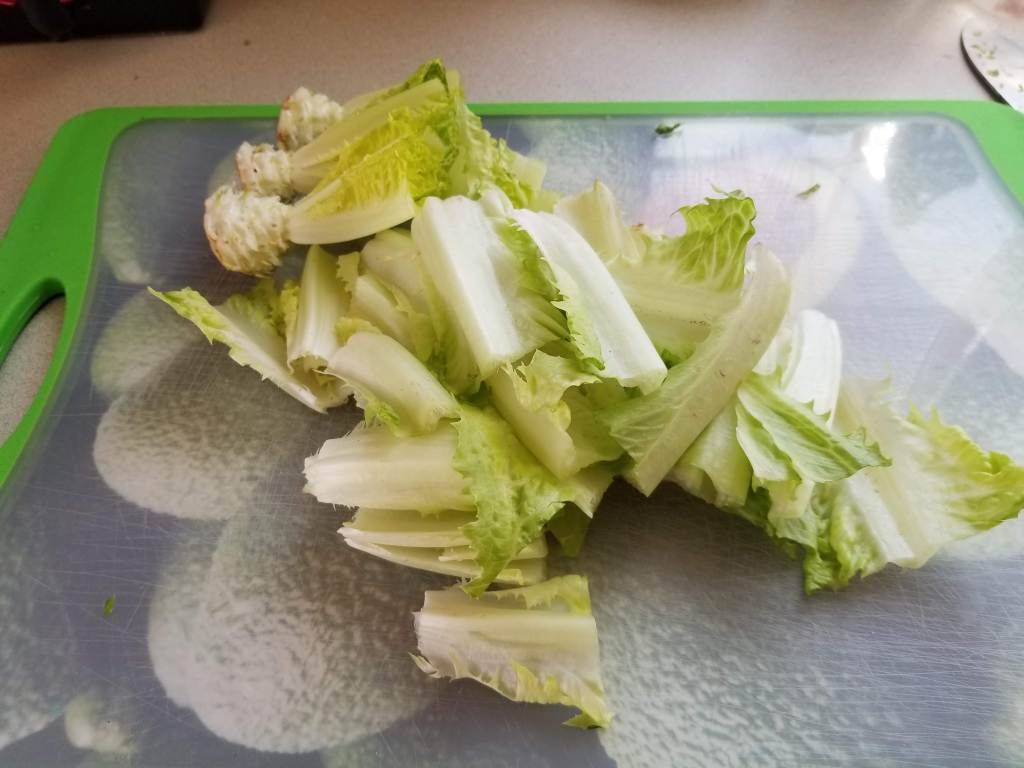 I keep these stems for Bodie because he loves crunchy. 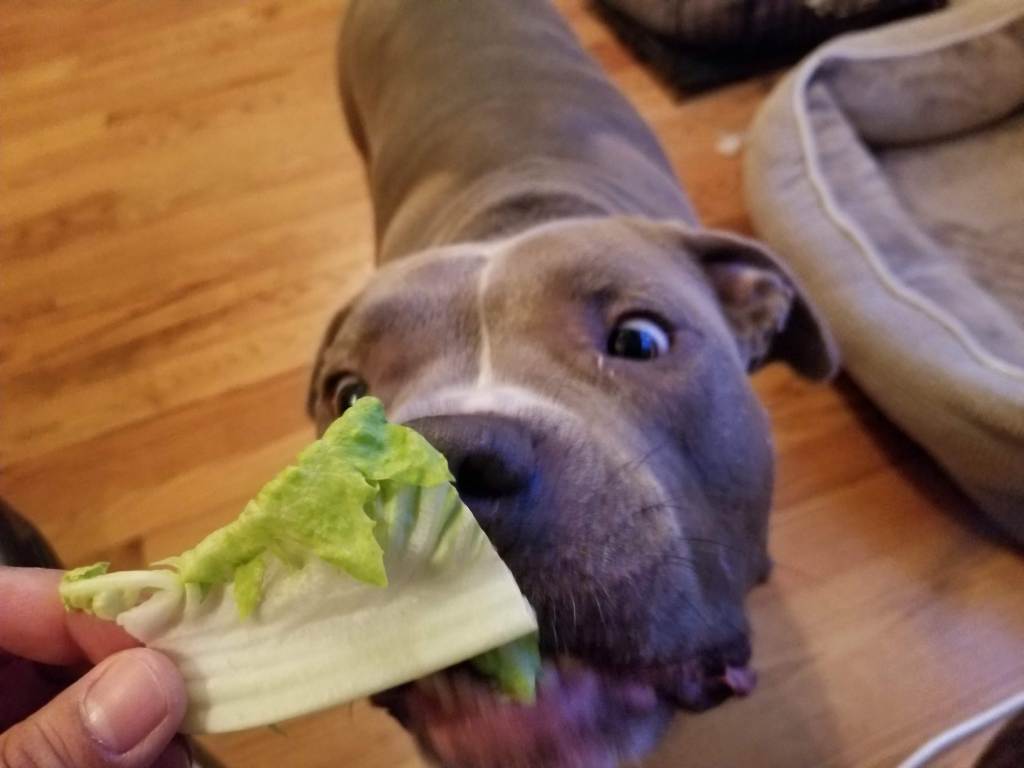 Told you he loves it!

Next up – pineapple time! 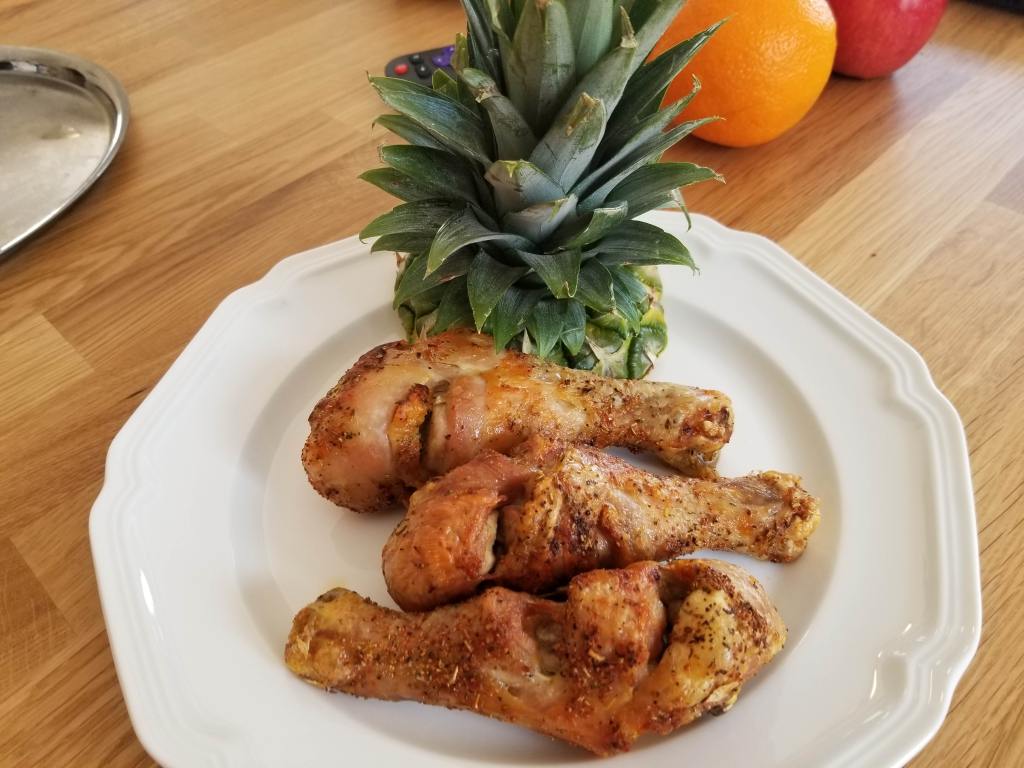 Oh yeah, I had some drumsticks going in the air fryer. I’ve always wanted to use a pineapple top as a garnish, so I took my shot. Can’t prep without snacking! And now I can call them Hawaiian chicken drumsticks. 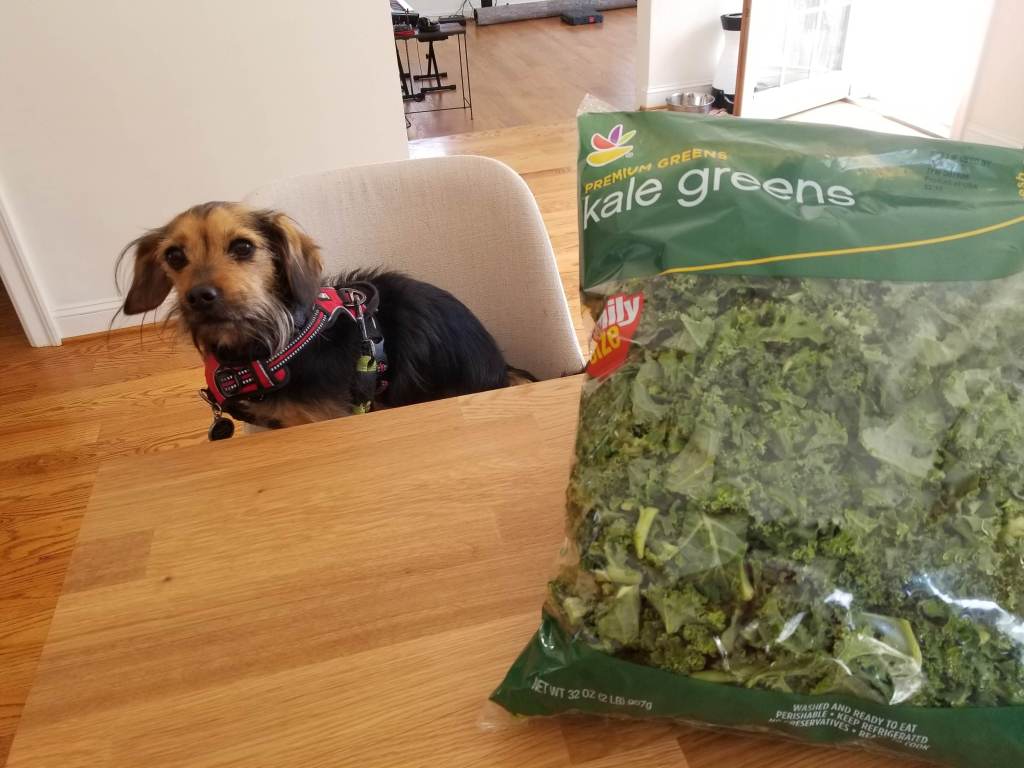 Next up – kale! Two lb. bag of it, because apparently it’s good for you. We’ll treat these Korean-style to add to our mid-week bibimbap. 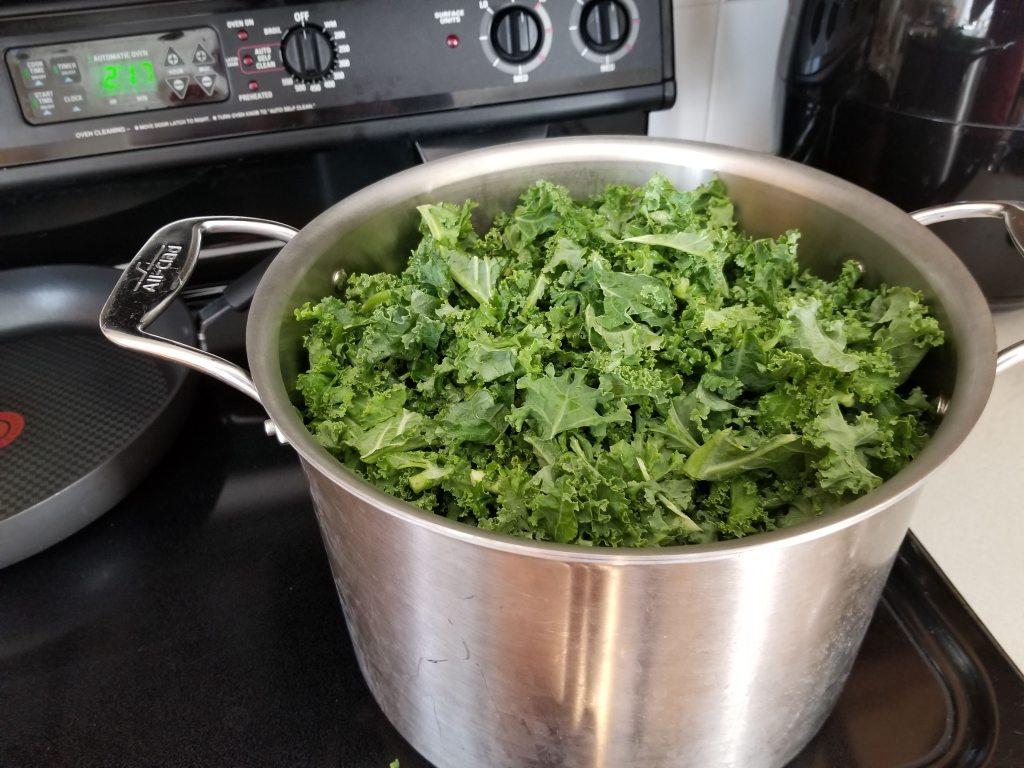 I dump the entire bag into this giant stock pot, add a cup of water, cover, and steam for a few minutes until it cooks down. 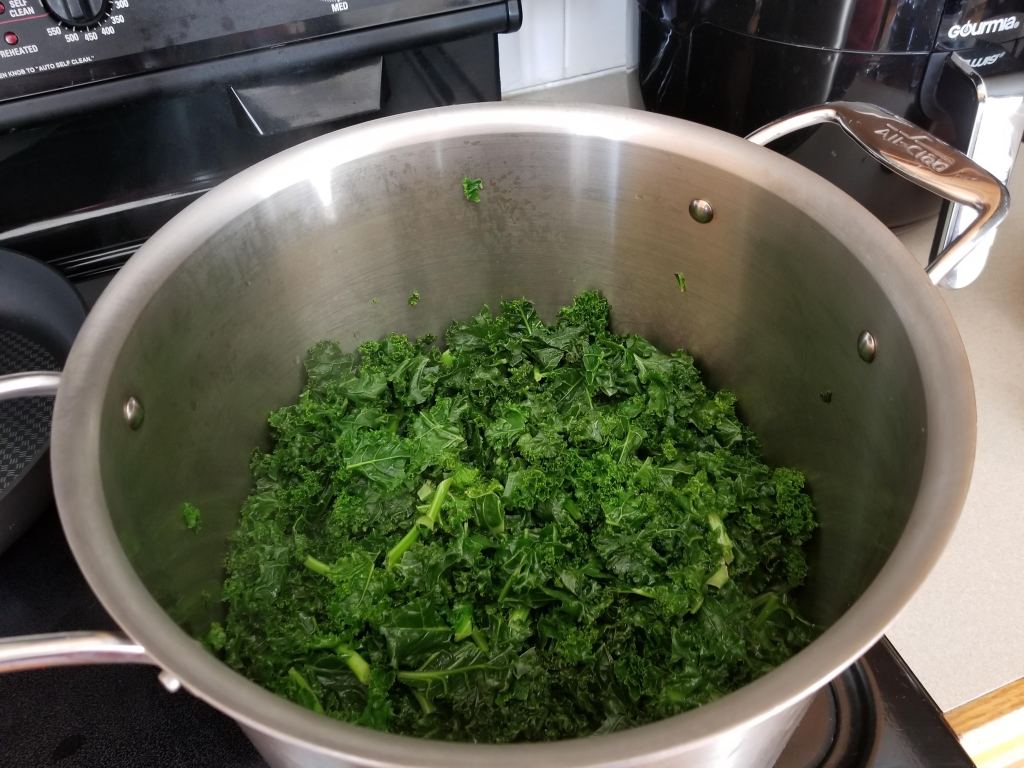 Let it cool down for a bit before it goes into the fridge for the week. 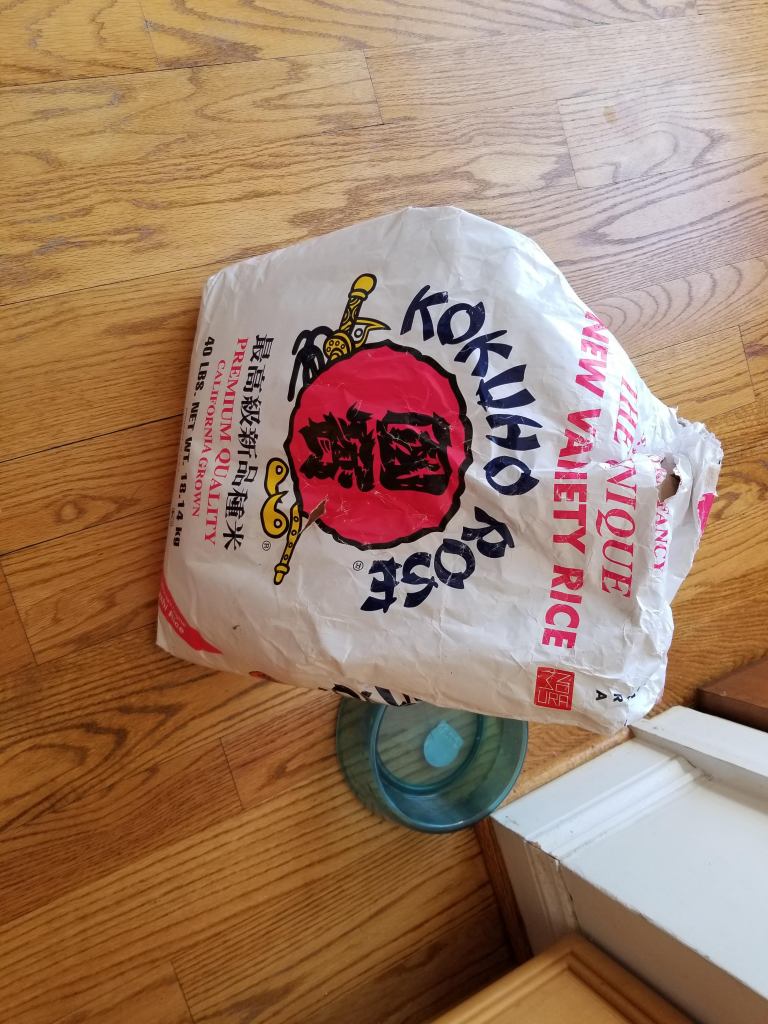 This is the brand of rice I grew up eating, so I still buy it today. That’s Bodie’s bowl, pictured for no reason than that’s where it usually sits.

Rinse the rice a bunch of times – I think to get the starch out? Again, something I just grew up doing. 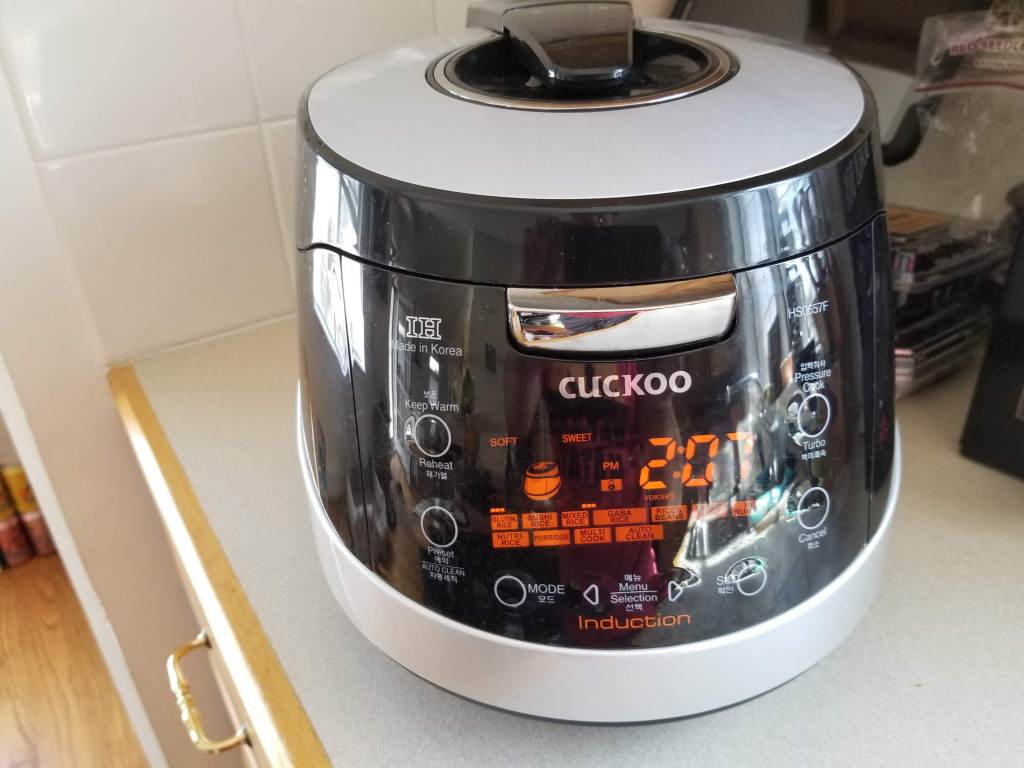 Fancy-ass Korean rice cooker that speaks better Korean than I do. 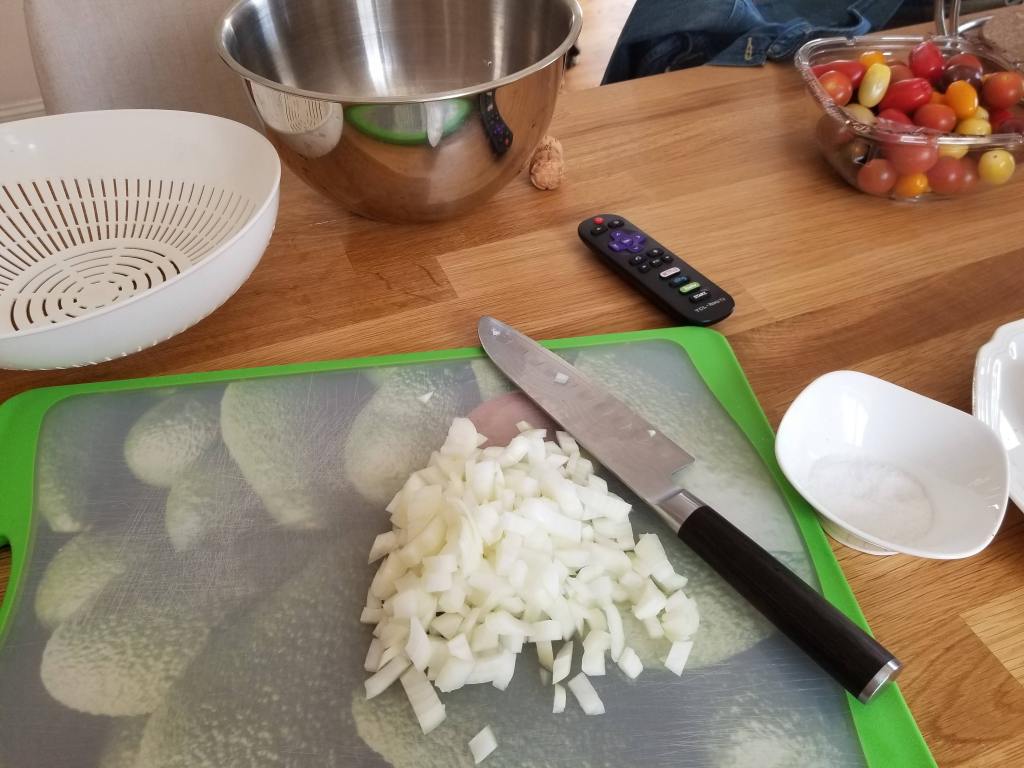 All this meal prepping is making me hungry for a cheesesteak, so I start chopping up some onions.

Next up – veggie “ground beef” also for bibimbap! I love this little temperature gun thing, use it all the time. Very helpful in the transition from using gas at our old house, to whatever the black glass heating element thing is called from those mid-90s kitchens.

After that’s cooked down a bit, let it cool and throw in these deli containers for the fridge. 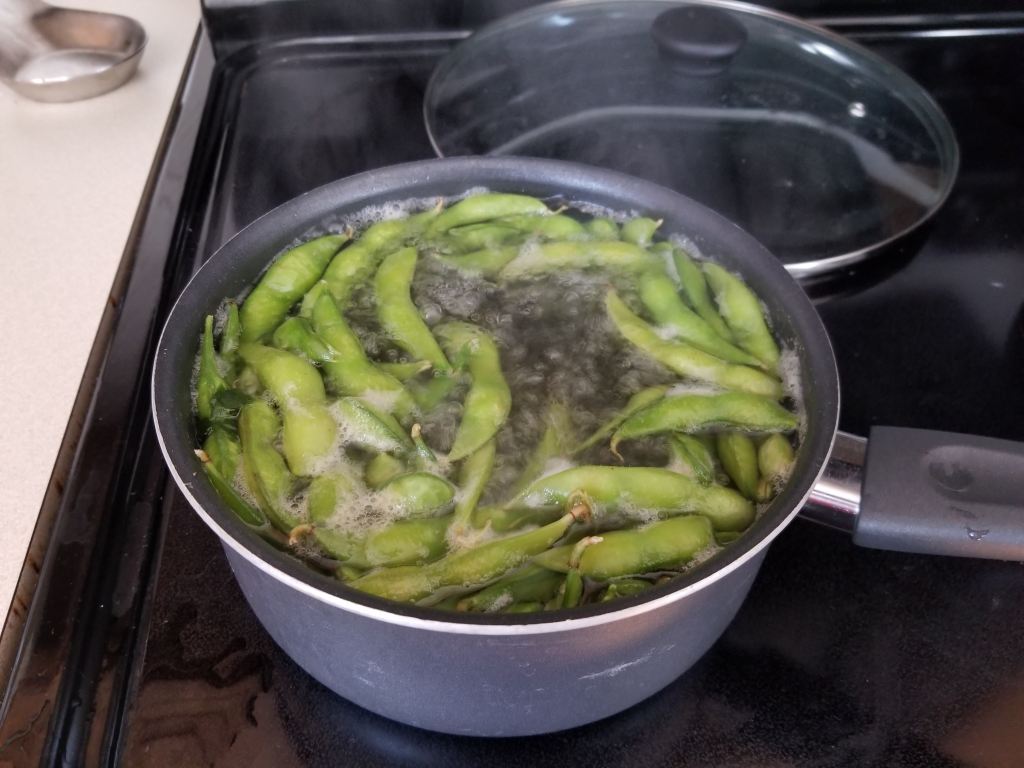 Amongst all this activity, the drumsticks have gotten way too cold to eat. Also, I started craving edamame, so I throw some of those in a pot of boiling water.

Mmm salt is the best. Europeans used to fight wars and sail to India to get salt and pepper, right? Or, at least, that’s what I think I learned in high school. For some reason, it didn’t strike me as weird back then that people would risk their lives to sail around the world and fight naval battles for spices. But, now that I cook a lot more, I’m like “yeah, I mean, how else are you going to make good food?” Better go find a quicker route to India, Chris Columbus (but did you have to be such an asshole about it?) 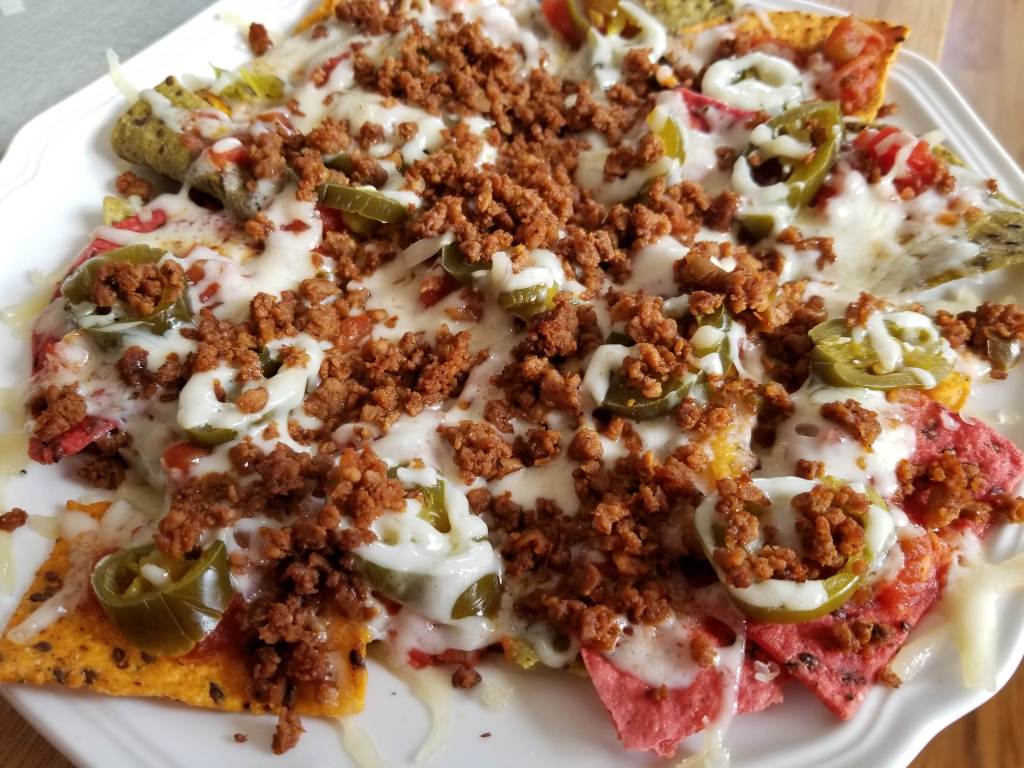 Callie randomly interrupts my beautiful process and asks for nachos, so I oblige. Those are veggie grounds of course. I didn’t have any taco seasoning so I googled it for the first time – apparently it’s mostly just chili powder with some salt and paprika. Nice. 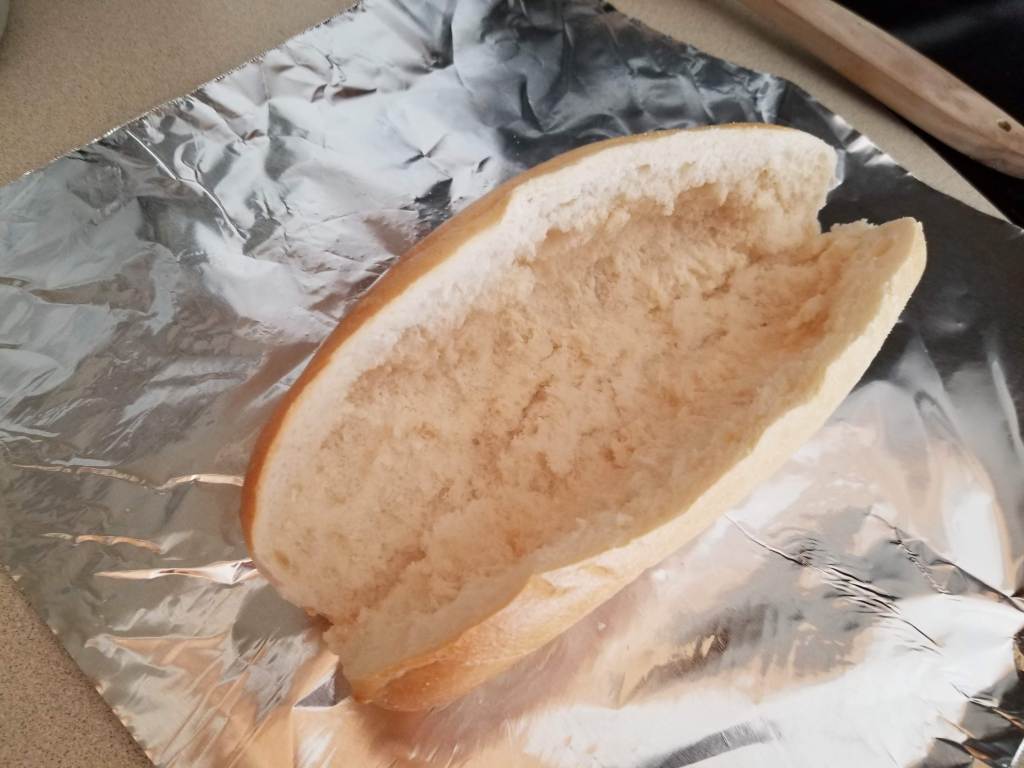 Back to that cheesesteak – gotta remove some of the bread from the inside, low carb keto baby! Or, as keto as a cheesesteak with 80% of the roll intact can get.

I never got around to eating those drumsticks, so I deboned them and decided to use that for my, now, chicken cheesesteak. Meat’s probably going to get overcooked but oh well, it’s dark meat. Can you ever really overcook dark meat? (Yes, you can, but it takes a second).

“Your rice is cooked!” the rice cooker says, in a pleasant, female Korean voice. 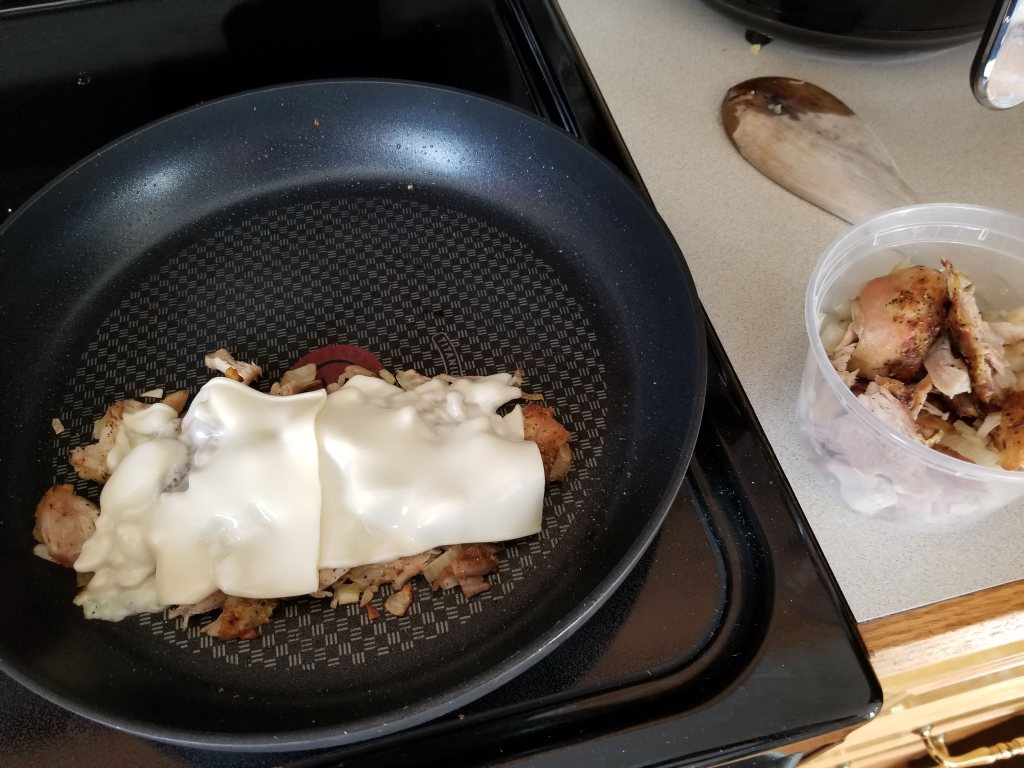 Chicken goes in the skillet, start melting some American cheese on top.

More cheese on top after you bun it.

Rice is cooked and cooled! Separate into these deli containers, then straight into the freezer.

Mmm chicken cheesesteak is ready! Alright, so how does this bibimbap meal prep thing work? Ever since I introduced Callie to Korean food, bibimbap has been her #1 favorite food. The problem is, it’s kind of a pain to make all of the ingredients that go into it regularly. If I’m trying to be authentic, or trying to impress people on social media, I’ll go all out and make an authentic bibimbap that looks like this…

But realistically, who has the time to do this on a weeknight? There’s like, five or six veggie ingredients in there that I would have to prepare individually. Also, aesthetically pleasing as the egg yolk is, taste-wise, I prefer fried eggs. But, Callie wants bibimbap like three or four times a week. So, I present to you, the barre bro’s lazy mid-week bibimbap meal prep:

Fire up that Korean clay pot! (Or is it stone?) I just blast it on the highest heat setting my weird black glassy heating range can come up with. The pot’s a little bit like a cast-iron skillet, although I don’t think it holds heat for quite as long as cast-iron does. But, it does seem to heat up a lot faster than cast-iron.

Once the clay pot starts smoking a bit, I add about a tablespoon of sesame oil to the pot and swirl it around. I’m usually pretty brand-agnostic, but I really do prefer Kadoya sesame oil. 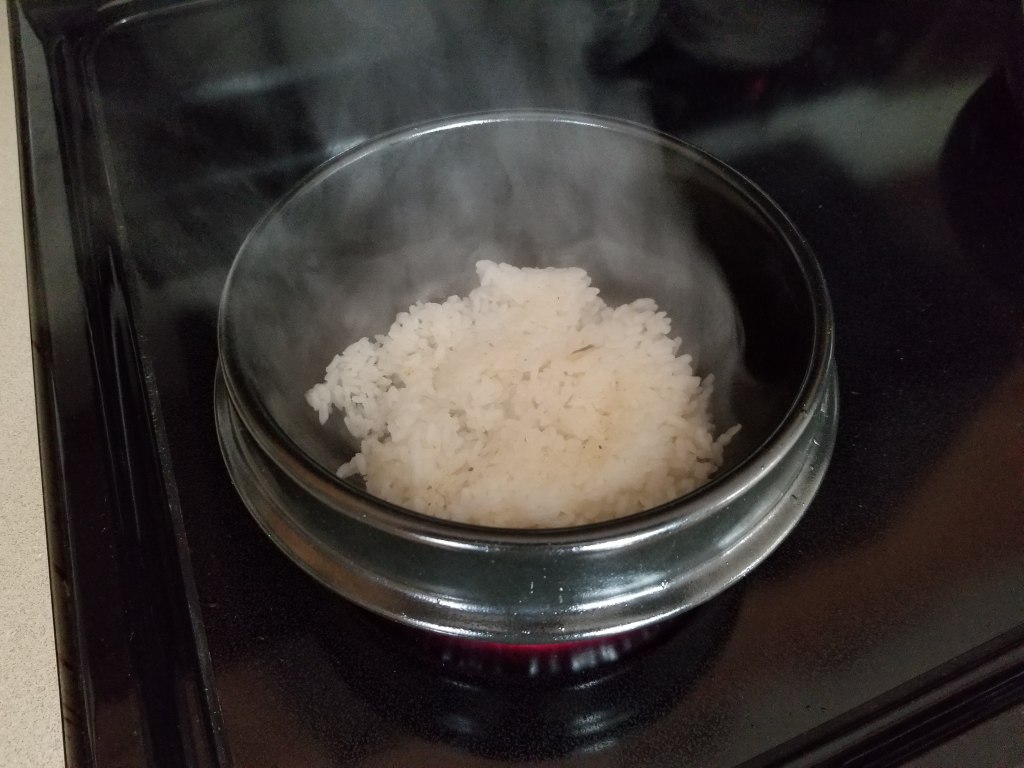 Add the rice (from frozen, 2 minutes in the microwave and the rice is ready). Mash it down a bit so there’s maximum contact area between the rice and the sesame-oiled clay pot. At this point I turn down the heat to medium-high. 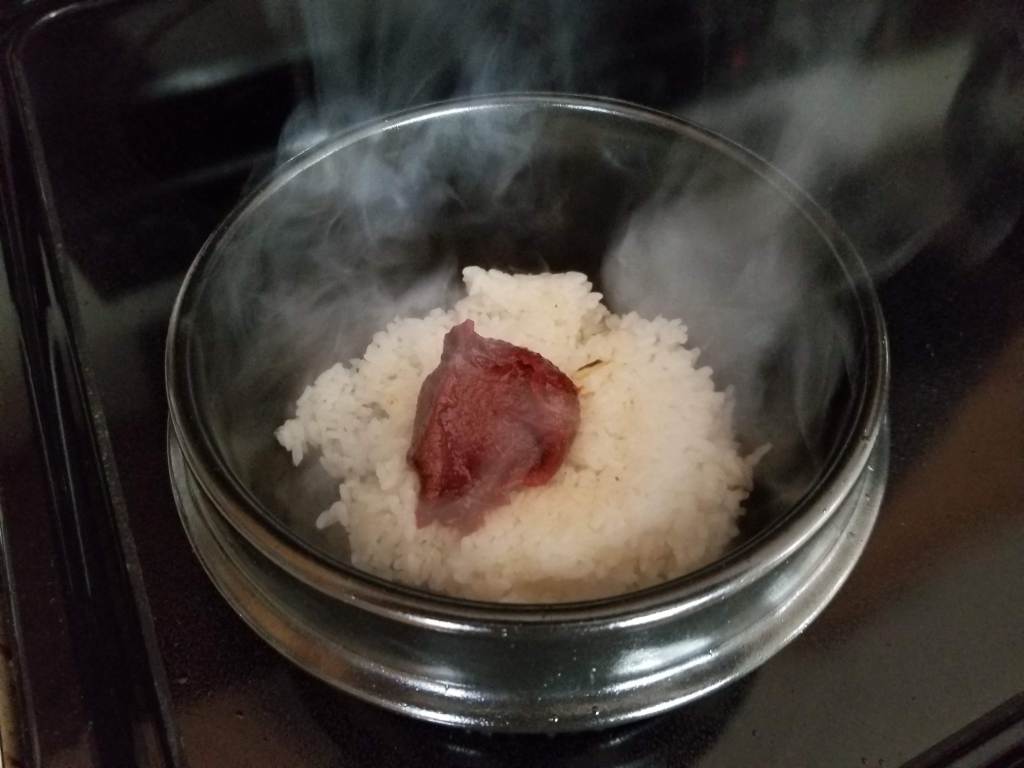 Add a heaping tablespoon (so really more like two tablespoons) of gochujang.

2-3 tablespoons of those seasoned veggie grounds. 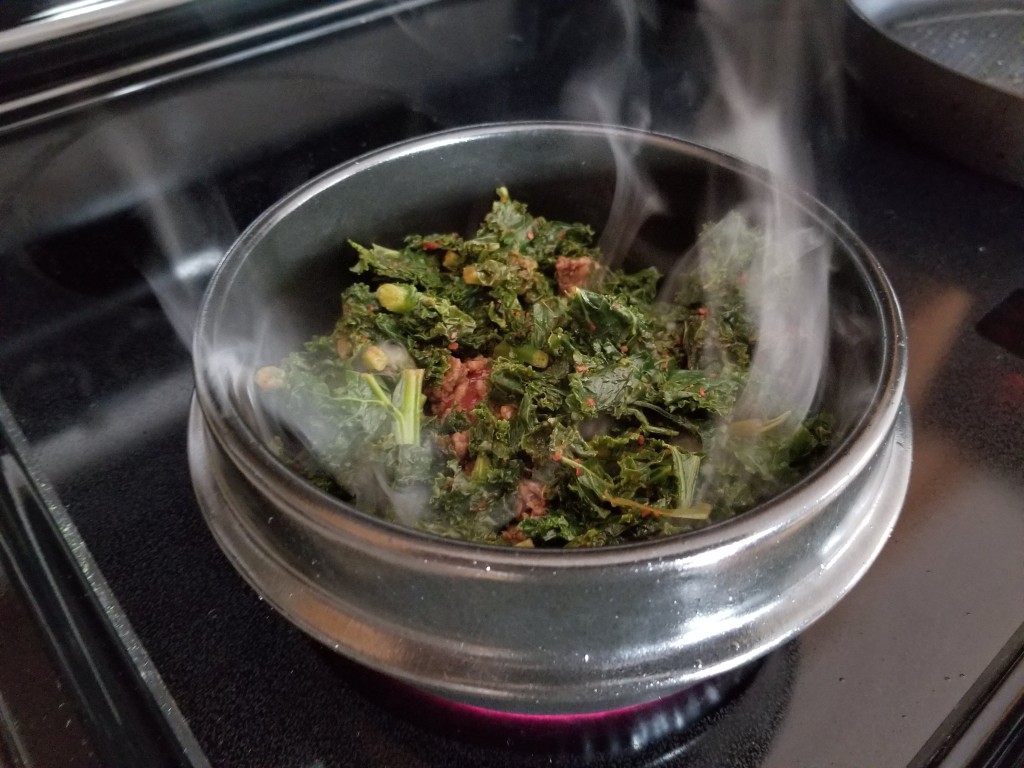 Throw the kale on top!

Fry up a couple eggs mmmm

Check that crispy rice goodness! From contact to here, the rice has probably been in contact with the clay pot for about 3-4 minutes.w 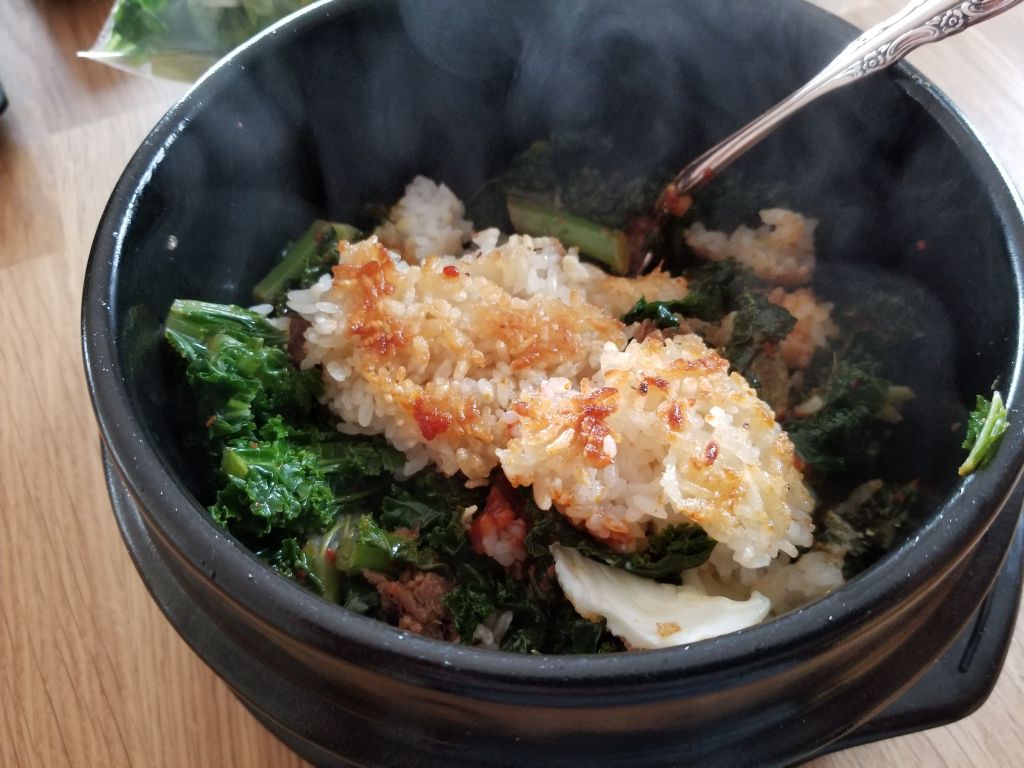 Toss in a little romaine for that crunchy texture. 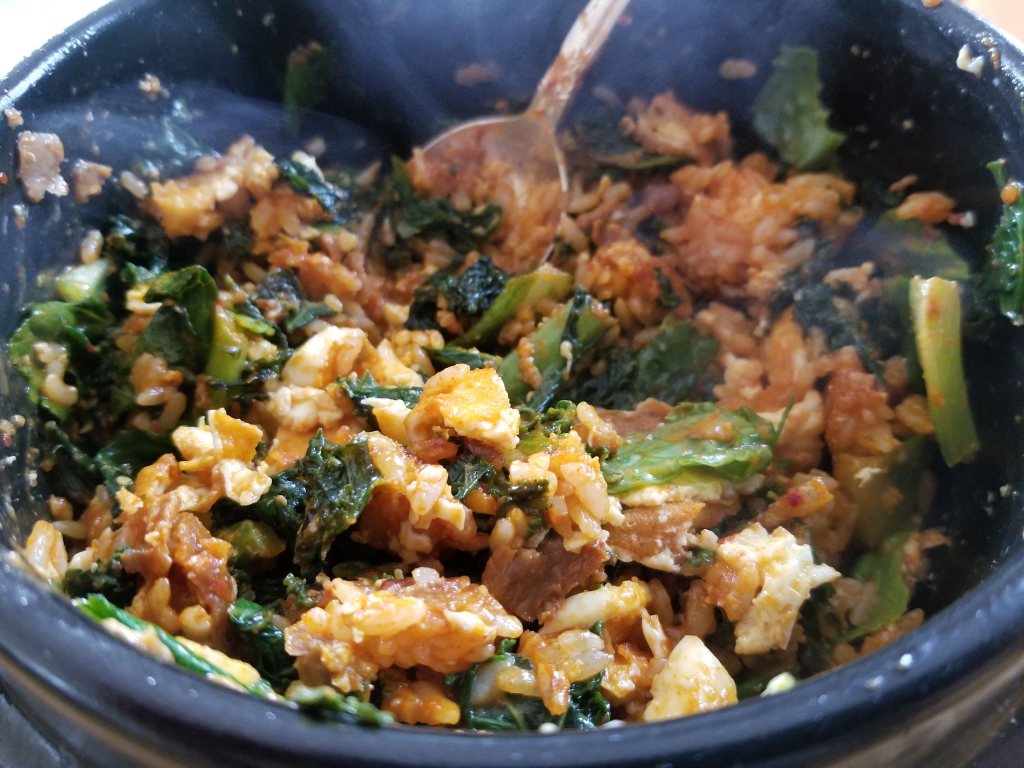 Mix it all up!

Less smoky picture, right before it’s ready to eat! And now Callie has dinner! Once the Sunday meal prep is done, I can assemble the lazy version of kale bibimbap in under 10 minutes on a weeknight.

And since we were so responsible in meal prepping on Sunday, Monday morning is off to a great start with all kinds of food for Callie to eat!

Look how happy she is when she has food to take to work!